HIs story, as told by Cathy Sauvé

Robert says, “I was meant to be on the water”.

He tells this to anyone who will listen.

Well here’s what I know about Robert.

First and foremost; he is the love of my life.

And here is the rest of the story as I know it:

Robert is the son of Robert J (Bob) and Gayle McConnell.  Born in Toronto, Ontario, Canada one cold day in November 1969.  He went to school in Stouffville, Ontario and did his post secondary education at the Canadian Automotive Institute in Barrie, Ontario as well as at the Northwood University in Michigan State with one semester in West Palm Beach, Fla.

He served one summer in the Canadian Search and Rescue (SAR) Coast Guard in the North Channel north of Lake Huron, and speaks very proudly of his experiences.  His family always had a boat, and they spent many summers on the water where even at the age of eleven, Robert spent countless hours behind the helm and honing his boating skills.  He quickly found that his true passion was for being on the water.  He told his parents, at a very young age, that his dream was to live aboard a boat.  Later on, he expanded that goal to sailing around the world.

He thought he wanted to go to school to be an architect, but his father had other plans for him.  Bob was in the Automotive business and wanted his son to follow in his footsteps.  So Robert decided to give it a try and found that he definitely had a knack for sales.  He still gets his hands dirty being Bob the Builder probably more often than he would prefer though.  He helped to build is parents retirement home on Halls Lake and can recount many good stories of working with his mother and father.  He also can take credit for the majority of the interior work of our home in Barrie.

Since his Mom and Dad passed away in 2003, Robert has been working himself into a frenzy trying to keep up with their house at Halls Lake, the rental cottage at Halls Lake, our unfinished house, and the house that my Mother lives in, never mind getting our sailboat ready for our big departure.  I’m sure he will be very happy when all he has to worry about is plotting a course to our next exotic location.

Robert has owned his own boat since the age of nine, and when you see Robert behind the helm of a boat, you can tell he is home. 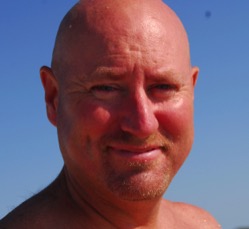